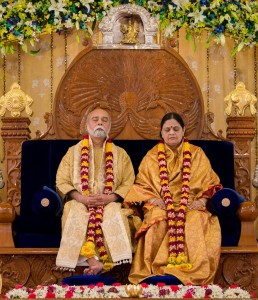 Returning to the Masters, the coming of my first beloved Master, Sri Sri Bhagavan, was certainly ‘God-given’ and a continuation of spiritual association [samskara] from past lives, as it all happened rather early in life – during my boyhood when I was still in high school. This was the only Master with whom I was destined to have a profoundly philosophical and also a very dearly personal relationship. I did not, of course, come upon my Master on account of my own discerning intelligence; rather, it was beloved mother who discovered his strong spiritual soul at first sight even though he was just about in high school at the time. Without the least bit of exaggeration, I may say that his coming into my life was like powerful sunbeams instantaneously flooding a dingy house, the moment the windows are thrown open to the world on a chilly wintry morning.

Each of my inimitable Masters had a very definitive teaching, and underlying that teaching, naturally, a concomitant approach to Moksha or freedom as well as to the spiritual life. And they certainly pointed to Isvara [God] or Parabrahma [Godhead] in unique ways; this served to set apart the teachings of each Master from the others.

The beloved Master Sri Sri Bhagavan was, in a strange way, directly responsible for my wandering beyond the precincts of his own philosophical domains, so that my coming face to face with the complementary teachings of my three other Masters became inevitable. For many years, I was under the rather naive impression that four Masters indeed had to remain only four, and an inner compulsion did not even arise in me to search for a grand unification by somehow attempting to string together the four into the unitary wholeness of the one. We humans seem to be programmed by the supreme intelligence of Isvara to always search for the one essence, in a world of bewildering plurality, diversity, and contradiction.

Through his compassion, my philosopher-friend and Spiritual Master Sri Sri Bhagavan had decades ago initiated me, firstly, into the soul-stirring depths of Hindu philosophy; secondly, into the God-centred spiritual ethos of the Hindu civilization; and most importantly and finally, into the waters of selfknowing.

This last terrain was uncharted and very much more difficult than the other two, for it called for the introversion of consciousness — a spiritual and yogic skill to which I was a perfect stranger at that time. I found this to be slippery ground, and ‘seeing’, which was the only sadhana [spiritual practice] my Master wanted me to do at that time, could never really come to pass until there was the negation of all the goals of ‘the me and the mine’, including the goal of ‘seeing’ itself. One particularly powerful sutra of Sri Sri Bhagavan, sent to me in one of his letters, helped me secure the breakthrough insofar as seeing was concerned:

In these words, Sri Sri Bhagavan was pointing to our human tendency to postpone seeing, that is, looking inwardly at ourselves in the sense meant by my Master Sri J. Krishnamurti. The Chinese philosopher Confucius had said somewhere that he had not come across a single individual in his life who was inward looking and therefore constantly learning! As human beings, we all have the weakness of being unable to look at our own ugliness and at the poverty in our hearts. Sri Sri Bhagavan, pained by this human condition, was giving an admonition and a wake-up call to me through that sutra.

In my life, the first five ‘medicinal decoctions’ have been drawn from:

After having ingested the five ‘medicinal decoctions’, in the way they came into my life, and after having internalized, understood & realized the same in my life, these Atmajnana Yajnas emerged, as an expression of my realizations.

Brochure Part - I (The Larger Picture)